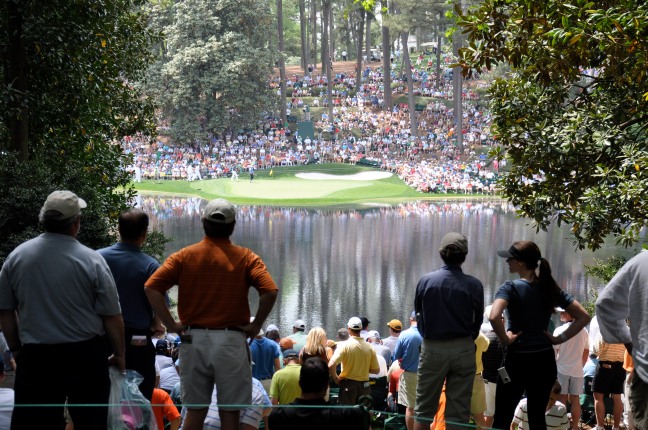 With the postponement of The 2020 Masters, I want to share my top twenty photos that I took on a special visit to August National on a Masters Practice Wednesday, one of the three practice days on which the public is allowed to take cameras onto the protected ground.

But first, I have to share the story of how it came to be that, on Wednesday, April 7, 2010, Julie and I ended up in the Butler Cabin.

We received the tickets in a two-step process of kindness of a friend and connections of  a stranger. My friend was Greg Stone, my former boss at Channel 2 WSB-TV. It was Greg who brought me to Channel 2 in 1999.

The stranger and ultimately our sponsor, was Cliff Kirtland. Mister Kirtland to me. He was a retired COX Broadcasting executive who joined the company in its early days in the mid-sixties. During his career with COX he played a central role in expanding and diversifying the company’s businesses into cable and auto auctions, which are now the two biggest slices of CEI’s pie of businesses.

And, importantly, Mr. Kirtland was also a longtime member of Augusta National Golf Club and had played a role on the committee that put on the tournament. In other words, he had his own green jacket.

Mr. Kirtland and Greg had known each other for years and it was Mr. Kirtland who sponsored Greg for some time with tickets. In 2010, four years after Greg had retired, he called me in early 2010 with a question. “If I could get two tickets to The Masters this year for you and Julie, would you like to go?”

YES YES YES YES!!!! My brain was shouting, but my calmer but excited self said, “We would love to go! Are you going?”

Well, it turns out that Greg was not able to go this year, which is why he wanted to know if I could. Before he called Mr. Kirtland to tell him that he couldn’t attend, he wanted to confirm with me that we were available and willing to go. Now that we had that straight, he would call Mr. Kirtland, inform him of his inability to attend but offer Julie and me up as suspects for the tickets.

Enough time went by from Greg’s exploratory offer that I started to doubt that it was going to happen, until the phone rang at work and it was Greg. He said that he told Mr. Kirtland of his unavailability but he would love to volunteer a long-time career COX employee to utilize the tickets. Greg told him my story at COX and my love of golf. I waited patiently through Greg’s explanation of the process for the punchline: “And Cliff is thrilled that you want to go and has two tickets for Wednesday’s practice round set aside for you and Julie.” He went on to explain that I was to call Mr. Kirtland and arrange for a time to meet him at his office off of Mt. Paran Road to pick up the tickets.

Oh how I enjoyed making the call to Julie that we were once again driving to August seven years after our first experience.

I was so nervous and excited to call Mr. Kirtland and set up the meeting. It turns out that he was just a year younger than my mom. He had been retired for years but still maintained an office and influence with an investment firm and it was there that I met him. He welcomed me into his office, we sat down at his desk and he said, “Steve, tell me about yourself and your years with Cox and Channel 2.”

Well, a couple of hours later and after a few naps by both of us, I finished my story.

Okay, I’m exaggerating, but not by much. He was such an interested man in so many things, particularly about the TV business and his beloved COX.

Then, he opened up this thick book of tickets and a long list of names. He had our tickets already in an envelope and I could see he was an organized man with lots of friends and connections in line for the opportunity to go to the Masters.

I asked him if he would be there on Wednesday and said that I wanted Julie to meet him. He smiled and said, “Oh yes, I’ll be there. I generally go over the weekend before and stay the week of the tournament. I still have a few things that they let me do to stay involved in the operation.”

“Well, I stay in the Butler Cabin. Stop by, just tell them you’re my guest and you’re here to see me.”

Tomorrow: Part 2 – Inside the Butler Cabin and the inside the ropes