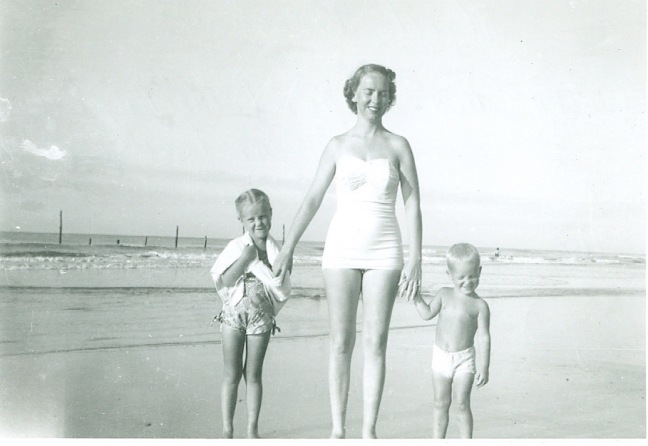 First, I’m the luckiest man in the world. My mother, at 96 “damn” years old, remains healthy, or as she says, “I’m in good shape for the shape I’m in. It does take a whole lot of work to get me up and going every day.”

She still packs a punch and a great laugh, both of which have endeared her to so many over the years.

The lockdown at her senior citizens community in Durham has been hard on her. She lives alone. No one can visit. And the residents are practicing social distancing to the nth degree. Many of them lived through H1N1 and norovirus episodes so they get the drill. Knowing that you’re being safe, protecting yourself and your friends by staying apart doesn’t relieve the loneliness that it brings on. It saddens me that anyone has to go through this, but in particular I feel for folks like my mom for whom these final years are so precious. She has great grandchildren she’d love to see and who would love to see her. Her grandchildren have done a great job getting video chats going with Mom, but it requires some assistance with the iPad she uses but clearly can flumox her as she tries to navigate around inside it.

So, it’s a struggle at times.

The virus has restricted Julie and me from visiting her much more frequently this year. Visits that mean so much to us and to her.

The same holds true for my brothers and sisters. Even my sister, Ginger, who lives just six miles away from Mom cannot see her. She drops off groceries and other odds and ends at the “Command Center” at the Home that are then delivered to Mom. Other friends and relatives who live outside of the home are now limited to phone calls just like those of us living away.

All that said, Mom has grit. The same grit that she used playing street hockey as a kid with the boys. 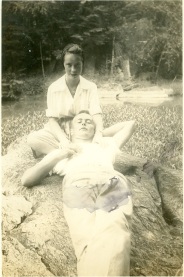 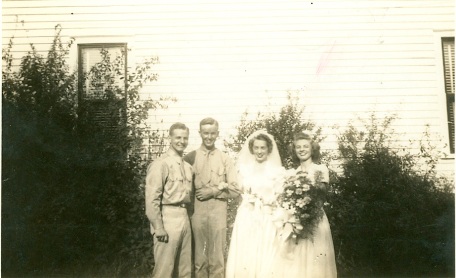 The same grit and determination that she used to ride the train from Durham to San Diego during WWII to be close to her Homer. He was stationed at Camp Pendleton in final prep for shipping out to fight the Japanese. It took over a week to travel the 2,500 miles. She was one of the few non-uniformed passengers on the train. It was packed with young soldiers moving to the West Coast for deployment. She was the only woman in her car, maybe the only female on the train. “Those boys were so polite to me, so kind and friendly. I don’t know that I could have made it without their help,” she told me. I can’t imagine the courage it took for her to board that train in Durham, leaving her family behind at 20 years old. “I’d never been beyond Catsburg before that trip,” she told me a few years ago.

The same grit that grounded her throughout Dad’s weeks of training, practicing beach landings, going on exercises for days and weeks at a time while she lived with her aunt and uncle in a small bungalow not far from the base in Oceanside.

For a while, she worked in a soda shop on base. One day a rough looking, bearded Marine came in and ordered a soda. She hardly looked at him before turning to the fountain to prepare the drink. She turned back to hand him the soda and almost dropped it. She finally had looked at him and saw through the beard and mustache that it was her Homer. He’d grown his beard on maneuvers and wanted to have a little fun seeing if she recognized him before he shaved. No whiskers could cover up the knowing twinkle in his eyes.

The same grit to let her man go after he had “jumped ship” for one more kiss and hug the night before steaming to the South Pacific into the great unknown of war.

How she made it through so much not knowing, like so many wives during that time, is beyond me. The sacrifices that she, and the country, made during those times, coupled with growing up through the Great Depression, left a mark on her to this day.

I will say this for a fact, whatever pain and anguish she suffered during those dark days, when Dad came home and she had him in her arms, she was bound and determined to make a life for them.

It was that grit that made her prod her Homer to take advantage of the GI Bill and go to college. He had survived the worst of the worst on Iwo Jima and in that fox hole he dreamed of making it back to his “Sha,” as he called her. He envisioned then a life as a plumber, the job he had trained in before the war. They would start a family. Right away. There would be no waiting.

It was Mom who insisted that they could do whatever it took, sacrifice whatever they must, for him to go to college. She believed in him and knew that he had the smarts and know-how to apply himself for a better life down the road.

It was one of the many times that Dad listened to Mom over the years. It made their marriage such a wonderful partnership.

It was that grit that she used to live in a prefab home for married Vets on the campus of NC State College, right next to the railroad tracks. She learned how to cook with a kerosene stove in a tiny little one bedroom house, and sweep floors through which you could see the ground below. She learned the warmth of their love could overcome the cold leaking through the spaces in the windows so wide that snow would blow in and collect on the sill.

They had their first child living there. A precious little girl who they named after Mom. The family photos from those times are all happy. Which is not to say that anything was easy or that they weren’t tried to the very core of their determination. But they were alive, in love, together and their first of five joys was filling their days.

No matter how Dad’s career moved ahead, Mom always managed the home as if they still lived in Vetville with little to no money. For her entire life, she has continued to get everything out of a bottle, jar or can and offers sharp criticism when she sees one of us being wasteful…of anything.  When she made a batter for a cake, she cleaned that mixing bowl with her spatula and wasted not a drop that could go into the cake pan.

In their early days, she and Dad set up a budget calculating the amount of money coming in his monthly paycheck and the spending money necessary for food and clothing. He gave her cash upfront with full discretion on how to spend it. She figured out how to make it work, month after month, squeezing every penny, saving green stamps, buying only sale items, ice milk instead of ice cream, shopping for clothes for us at Roses Five & Dime Store. Very rarely did she buy anything for herself that wasn’t related to keeping house and raising kids.

It was grit and determination that got her through Dad’s international travel to construction projects in Africa, Greenland, and South America. When he traveled to these far off places, the days it took to get there and back made for trips lasting up to three weeks at a time. That left  Mom alone, in charge of five kids with a twelve-year spread from youngest to oldest. How she handled that without going crazy, I just don’t know. Marti certainly helped out as she grew older. Then Lin, then me, as we each got our drivers licenses, we at least relieved Mom of chauffeuring ourselves and the younger kids to after school activities. I know that one of the biggest days of her parenting life was when Page, the baby, got his license and Mom was freed forever from driving kids around.

She balanced that grit by giving her love, laughter and time to her family and friends with a boundless energy. Once the last child was a teenager, she really began to live her life even more fully. She showed us all how to find yourself after the kids have left the nest. She and Dad made a great life of retirement. But she never lost her grit. Ever. You hear it in her voice, pushing back the loneliness of living without her Homer and living during the virus. You hear it in her continued interest in everything that is going on in Durham and the world around her.

So, here’s to Mom, the former Martha Kerr Glymph, and the forever Martha G. Riley.

Happy Mothers’ Day Mom. You are one of a kind and I am so lucky to be your son.

“I am so fortunate in so many ways,” she told me. “And the mothers in our family, Julie, Sylvia, Maggie and Ginger, Claire, Kia and Brenda are just wonderful.”

Thanks again for reading and I wish all the mothers that I know Happy Mother’s Day! I want to end by sharing a poem I wrote and sent to Mom back in 1985 for Mother’s Day.

I was thinking about you,

And how much we used to talk

To one another about things…

Mostly in the kitchen,

While you were cooking, I’d stir.

Or while you were resting,

Drinking your cup of coffee,

We talked about unimportant things,

And things that mattered,

Subjects of the heart,

And convictions of the mind.

I learned a lot about the world;

How you felt about it, our family,

We agreed and disagreed,

But we always cared,

I knew you were my friend…

With all of my love,

8 thoughts on “Mother’s Day Versus Virus”