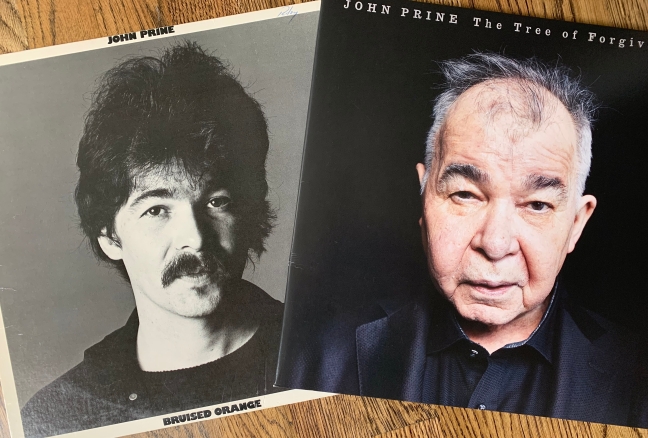 That’s the text that popped up on my phone last night while Julie and I were watching tv. It came from our daughter Blair. It was a message I was expecting to get from somewhere all too soon. Too much time had passed without any good word from Prine’s wife, Fiona, posted on her Facebook page. And every day was another day on the ventilator. The last gasp hope when the lungs are failing from this disease.

We paused the show and I went online and there it was everywhere.

Julie and I hugged each other tight. And then hugged even tighter. Squeezing out the loss.

I sent a text to my guitar playing buddy, Brad. He replied with a Prine line, saying he’s kissing “a pretty girl on the tilt-a-whirl.”

It was late, even in Retirementville. We gave up what we were watching. Julie went upstairs. I found my guitar, sat down and played the songs I’ve been playing for years without even thinking of order or what’s next. Just a stream that started with the first song of his that I learned from Brad, “A Good Time,” then “Angel From Montgomery,” “Sweet Revenge” and finally, “Fish & Whistle.” I sang ‘em soft when they were soft. Gruff when called for and revolting when necessary before ending on playful.

We’ve got three lamps on timers downstairs cause we’re lazy and to make the place look lived in when we’re living somewhere else. One lamp after the other cut off during the last song. I finished in the dark. Apropos. A thematic occurrence. A cosmic cue.

Goodnight John. Too soon to say goodbye but the lights are out and it’s time to go.

That was last night.

This morning I woke up to John’s voice, singing to me in my head. And, I’m not making this up, the first words were the chorus to his song, “Please don’t bury me down in the cold cold ground. No, I’d rather have them cut me up and pass me all around. Throw my brain in a hurricane and the blind can have my eyes. And the deaf can have both of my ears if they don’t mind the size.”

The chorus took me to the beginning of the story.

“Woke up the morning, put on my slippers, walked in the kitchen and died. And oh what a feeling when my soul went through the ceiling and on up into heaven I did rise. When I got there they did say, John, it happened this a way, you slipped upon the floor and hit your head. And all the angels say, just before you passed away, these were the very last words that you said…”

And so it goes. And so he’s gone. I never met him in person, but more than almost any writer out there, I knew much about him from his songs, from interviews and from a 2015 biography written by Eddie Huffman. It’s called, “John Prine In Spite of Himself,” a riff off of Prine’s song, “In Spite of Ourselves.”

It reveals the birthplace of his quirkiness to fit just the right turn of a phrase, to recognize the mundane in all of our lives, while speaking to the meaning mundane occurrences add to our living.

Sometimes spoofing who we are, who he is and what we all seem to do at one time or the other. Sometimes playfully underscoring his self-deprecating humor. And, often, he speaks to the sadness and loneliness of living through the people you meet in his stories, like Donald and Lydia, and, Sam Stone to name a few.

That really nails the man that I know. He was the least driven man to “make it” but his ability to play, write and sing in such a touching, fun loving mixture of emotions grabbed the attention of Kris Kristofferson and Paul Anka and made him an overnight success. For years, he never even considered himself a songwriter. According to Huffman, “He just thought he was a MidWestern kid who loved to make up songs.” And make them up he did, but many of them were based on truth, things that had happened that he had heard about or seen for himself that turned into a lyric. Something like an accident he discovered on his way to shovel snow off the church house sidewalks in “Bruised Orange Chain of Sorrow”:

I heard sirens on the train track howl naked gettin’ nuder, An altar boy’s been hit by a local commuter, Just from walking with his back turned To the train that was coming so slow.,

Or, words of wisdom from a level-headed (topless) dancer in “Spanish Pipedream”:

“Blow up your tv, throw away your paper, move to the country, build you a home. Plant a little garden, eat a lot of peaches, Try and find Jesus on your own.”

The amount of words and songs written about and for him over the last few weeks has been a virtual love-in. Social media has harbored and spread the love in the blink of an eye, originally to push that love somehow through to him on his dying bed and encourage him to get well, get up and get going.

His passing amplified the amount in a quantum leap of intensity as people touched by him release their moments, connections and sadness.

Clark shared Rolling Stone’s version of Prine’s top 25 songs. It is more than worth checking out. The article contains links to all 25 of the songs, a feat only made possible by the wired world in which we live. And through it all, I’m hearing more songs of his than I knew before. It opened up his catalogue in a bolt of lightning. My personal collection was frozen in time that stopped with “Bruised Orange” until last year when I picked up his latest, “The Tree of Forgiveness.”

Hearing old songs off of un-bought albums for the first time is like hearing something new. And, I think that that will go far in getting through this.

It goes without saying that John was an old soul as a 20 year old. But, at 73, he was far too young to leave us so soon. He had rekindled his writing muse with “Tree.” He was set to tour again. He had life ahead of him, until he didn’t. Until a pandemic unleashed and struck him at his most vulnerable. As I hear the numbers reported in each newscast of the infected and dead, I now know the owner of one of those numbers.

And to end with his own words off of “Summer’s End” on Tree of Forgiveness:

The most fitting way to close out is with this from his mortality romp on Tree:

“When I get to heaven, I’m gonna take that wristwatch off my arm. What are you gonna do with time/After you’ve bought the farm?